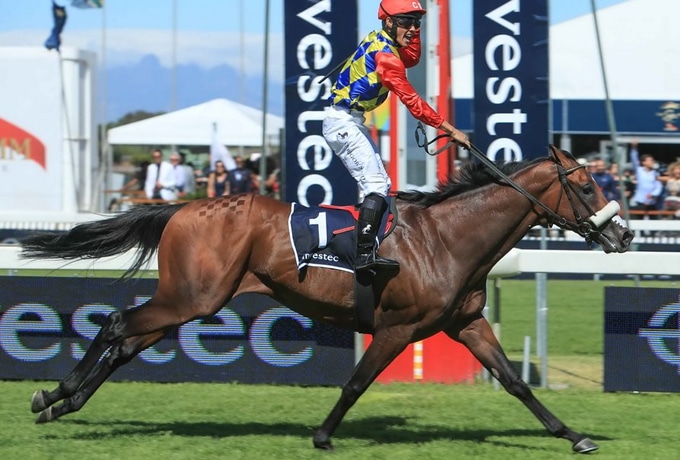 Highlands-bred Dynasty colt back to best

The decision to give the Sun Met a miss and focus on the R1 million Investec Gr1 Cape Derby paid dividends for Chrigor Stud and the Woodhill Racing Team when Dynasty’s star son Eyes Wide Open charged to victory in the prestigious classic. Glen Kotzen’s previous Derby winner Big City Life – it’s unbelievably been 9 years already – went on to win the Vodacom Durban July and the in-form Paarl conditioner will no doubt already be thinking on those lines as he sits down to select his KZN A- team in a few weeks time.

A winner of the Gr2 Peninsula Handicap at his previous start against older horses, Eyes Wide Open dug deep to reel in the free-striding Steel Rose, who grabbed a dangerous looking lead in the home straight.

While not detracting from the win, the race was run at a dawdle courtesy of Greg Cheyne and PE raider Kimberley Star, who brought them into the straight in slow time. Comeback kid Piet Botha seized the moment on Steel Rose and took up the 500m sprint challenge in the rush for home.

The Glen Puller longshot continued to roll into the 200m with an upset on the cards.

But that’s where Eyes Wide Open showed his ability and heart, as he moved up and went past the Gitano Hernando gelding to win going away by 1,75 lengths in a time of 125,62 secs. Do It Again came out the pack to grab second, ahead of another Kotzen-Chrigor runner in Pack Leader. Steel Rose enjoyed his moment of Gr1 glory, hanging on doggedly for fourth.

An elated Glen Kotzen, who trained first and third here, and enjoyed a great day with a  hat-trick of winners, said the winner was a ‘magnificent colt’ and thanked the Hattingh family for their loyal support. “There have been talk of viruses. It’s been a stressful time. But the top horses always shine through,” he said. Owner Hugo Hattingh thanked his jockey and trainer: “We are so blessed. Eyes is back to himself after returning from KZN, when he battled a bit. Richie (Fourie) rode a pearler. He is a man who always brings his A game to the races,” said the pleased owner.

Richard Fourie  was full of praise for the winner: “His star is on the rise – this is the closest you will get to Dynasty. He has everything – big race temperament, heart and ability. What a  horse!”

The Highlands bred Eyes Wide Open is a son of Dynasty (Fort Wood) out of the one time winning Live Your Dreams (Jallad).