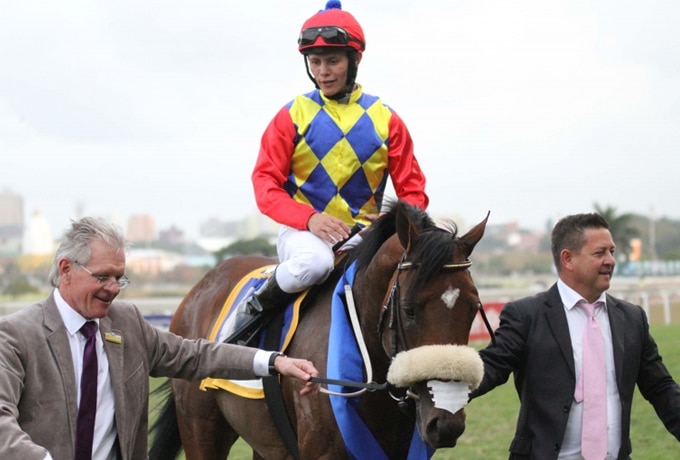 The Eyes Have It

Highlands stallion Dynasty confirmed his status as South Africa’s premier home-bred sire when he produced both Gr1 winners at Greyville on Sunday.

Richard Fourie has time to pose – with eyes wide open – as he steers the Dynasty colt Eyes Wide Open to a smart Gr1 win
After Lady In Black’s dazzling success in the Thekwini Stakes, the handsome Eyes Wide Open was an easy winner of the R750 000 Gr1 Premier Champion Stakes.

With much of the cream of the current 2yo crop lining up, the race was expected to add some value to the Equus deliberations next week, but Eyes Wide Open’s success has really only served to blur that picture.

The bang in-form Richard Fourie helped himself to a second Gr1 win in the space of 24 hours and what a pleasure it was to watch a confident jockey on a progressive youngster.

Jumping from the 6 gate, Fourie had Eyes Wide Open relaxed in midfield as Tarry third-stringer Warrior’s Rest led the charge ahead of Monks Hood, Pack Leader and Mujallad.

Into the home run they fanned out, with Ancestry 7 lengths off as he followed Eyes Wide Open. Up front Mujallad ranged up dangerously as Warrior’s Rest stuck gamely to his task.

At the 300m, Ancestry and Eyes Wide Open took off together, with the latter finishing the stronger to win easing up by a half length in a time of 96,69 secs.

Golden Horseshoe runner-up Ancestry had to play second fiddle again, but should be a different proposition on the Kenilworth summer straight – like the winner, he is one for the notebook!

The pacemaking Warrior’s Rest was a head back in third, with Monks Hood right on top of them in fourth. The winner’s stablemate Sea King, racing under new ownership, ran a gutsy fifth.

The Golden Horseshoe winner Purple Diamond never settled from his wide draw and fell away to finish last.

It was jockey Richard Fourie’s first race ride on Eyes Wide Open but he knows the colt well from home. “He has always been a fancied horse – if I had my way he’d still be in Cape Town waiting for the summer season there! He is a beautiful horse with tons of ability and it is an honour to ride for the Hattinghs and the Woodhill Team,” said Fourie.

Trainer Glen Kotzen, who ended the day with four winners, said that it was clear that Eyes Wide Open had the ‘big race temperament’. “I thought that this race may have come too soon but his class showed. He is an exciting prospect. Well done to Hugo and Suzanne – they deserve the success.”

The Hattinghs were celebrating their first Gr1 win here and while they have had some smart horses – including Selangor winner Gold Standard – they look to have something special on their hands.

“We have been in this game for a good couple of years. It is wonderful to see this horse first time at Greyville – when Richard pressed the button he strolled through. Well done to the whole Woodhiill Team. We are thrilled,’ said Hugo Hattingh.

The Highlands bred Eyes Wide Open is a son of Dynasty (Fort Wood) out of the one time winning Live Your Dreams (Jallad).