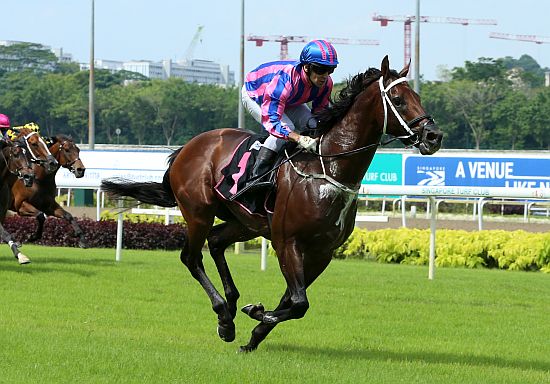 The latter claimed his third success in Singapore on Saturday when he captured the Spanish Bay 2015 Stakes at Kranji.

The win was a much-welcomed relief to his connections, who went through some head-scratching moments when the 2020 Cape Winter Series Triple Crown winner put in two disappointing runs following back-to-back wins earlier this year.

He only beat two home in the G1 Kranji Mile on May 21 at his last start, with that effort resulting in connections electing to geld Katak.

Katak showed the benefit of this operation with a facile win on Saturday.

“It was a big call for me to geld the horse because if that didn’t work, where do we go,” quipped the winning trainer Ricardo Le Grange.

“To (owners) Marsh (Shirtliff, father), Guy (son), Bryn (Ressell), (racing manager) Mark (Van Deventer) and the breeders at Ridgemont Highlands Robertson Stud (South Africa), thank you so much for your support and the time you’ve given me with this horse.

“I think there could be times they were scratching their head and thinking ‘does this clown know what he’s doing?’

“Today, he (Katak) showed me what I’ve always expected of him.

“Everything was against him, the weight (58kgs), the draw (eight) but he still put paid to a decent field, with him giving weight to some multiple Group 1 winners.

After assuming the leader’s role on the paint early, Katak, under Vlad Duric, kept charging to the line, but started hanging out badly at the 250m.But under a few reminders from Duric, the favourite maintained the gap to an unassailable level to romp in by five lengths from Circuit Mission.With his third win from nine starts in Singapore, Katak has amassed close to $260,000 in prizemoney for the Vasco Stable.

Unbeaten in five starts in South Africa, Katak had also caught the eye when finishing second in the prestigious Queen Elizabeth II Cup in 2021.