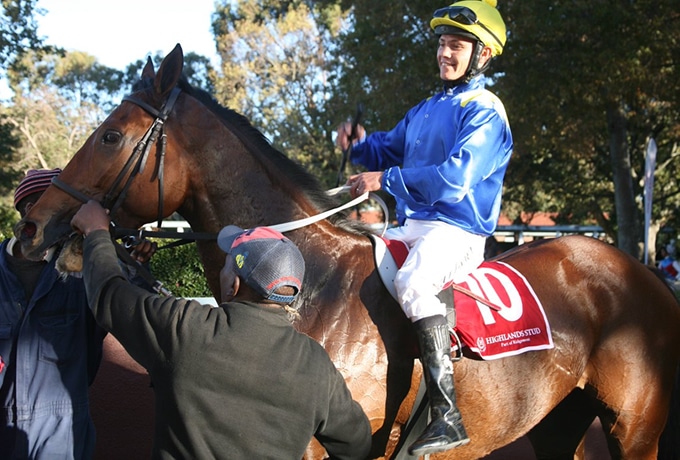 The honour roll of the Gr3 Winter Guineas is littered with the names of top-class racehorses over the years. We could have seen something quite special at Kenilworth on Saturday when the Ideal World gelding Rainbow Bridge became the first horse in history to win the classic at only his second start.

‘Champion’ is not a label that top jockey Richard Fourie bandies about loosely. But the man who claimed a notable feature double on the sunny afternoon, was full of praise for Rainbow Bridge. Fourie, who was aboard when Rainbow Bridge won on his Kenilworth 1200m debut three weeks earlier, said ‘it was not every day one got to ride a champion’.

“He floated down to the start. And you know you are on a good one when they have to jump and be used up to overcome a wide draw – and they are cantering still at the 700m! I always had a lot of horse under me,” he added.

Trainer Eric Sands was as pleased as punch in the post-race interview, confirming that owner Chris Gerber had agreed to let the gelding take his chances.

“It is not what I would normally do but I gave Chris (Gerber) the option of taking a softer route.I don’t often get one this good and the Guineas only comes once in a horse’s career. He was injured early on and has been given plenty of time.He’s smart,” said the veteran horseman.

Fourie rode Rainbow Bridge in much the same fashion as Too Phat To Fly in the Sweet Chestnut Stakes a half hour earlier.

He had the goodlooking, but ordinary, bay relaxed at the back of the field as Tsitsikamma Dance led Doublemint and Man About Town into the straight.

At the 300m he switched Rainbow Bridge and the son of Ideal World lengthened his stride to come home under the hands to win unextended by 1,25 lengths in a time of 103,06 secs. This was impressive and he did it like an old pro! Ancestry moved forward menacingly halfway down the straight but tired late to finish just out of the money, under two lengths back in fifth.

The favourite Fresnaye, the only filly in the race, never showed and ran a 2,60 length sixth. Rainbow Bridge was bred by Wilgerbosdrift and Mauritzfontein and is a 3yo gelded son of Ideal World (Kingmambo) out of the versatile seven-time winner Halfway To Heaven (Jet Master), whose successes included the 2013 Gr3 Prix Du Cap.

Eric Sands trained the dam for Gavin Walker until she was sold to Mauritzfontein, in whose silks she raced for Mike de Kock at the end of her career. Unbeaten in two starts, the R300 000 National Yearling graduate has won two from two and took his stakes to R206 250.

It’s early days yet, but Rainbow Bridge could go all the way in the Highlands Cape Winter Series!

Here’s looking forward to the second leg, the Gr3 Winter Classic to be run on the Kenilworth winter course 1800m on 26 May.