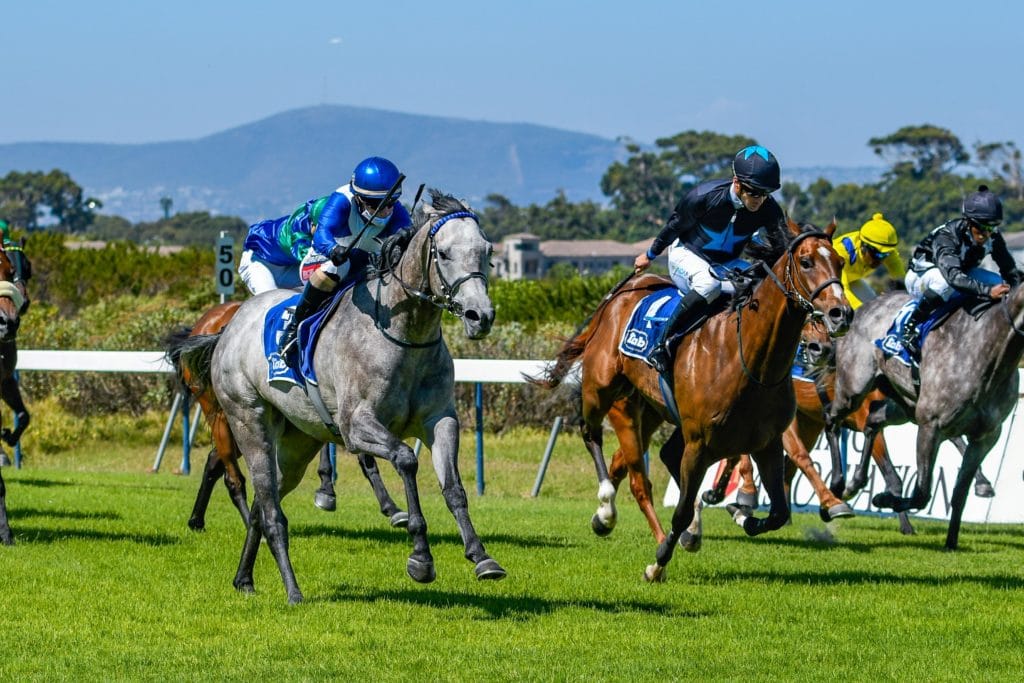 The Ridgemont Highlands team celebrated a sparkling trifecta in the fourth race at Kenilworth on Monday when the champion nursery bred the top three to finish.

It was multiple champion jockey Michael Roberts who said at his tribute raceday on Sunday that there was little difference for racing folk in enjoying and celebrating Gr1 winners and maiden winners, and for the Kieswetter family the dominant result of the Kenilworth fourth was a particularly pleasing one.

Ridgemont jockey Anton Marcus steered the handsome grey Sage King to an overdue icebreaking win at his sixth start when the son of Dynasty stayed on powerfully from an awkward barrier gate.

The flying grey stayed on best to beat another two Ridgemont Highlands products in Silent War and Billionaire.

The winner  is particularly well related. His full-sister is Smiling Blue Eyes, a dual stakes winner who was exported to Dubai, while he also boasts the top-class Jallad stallion Russian Sage as a half-brother.

Sage King  is out of the five time winning Badger Land mare Sage Blue, a half- sister to former Gr1 SA Derby winner  Silver Sliver, who hails from the family of champion fillies Cerulean Blue and Grey Swift.

The runner-up Silent War is trainer by Candice Bass-Robinson and is a Gimmethegreenlight half sister to the Ridgemont Highlands bred and raced dual stakes winner Pretty Young Thing (Jackson) and Gr3 Variety Club Mile winner, Warrior (Futura), who was recently withdrawn from the Cape Town Met.

The third finisher, and yet another striking grey from the Brett Crawford stable is the Jackson gelding, Billionaire, who showed encouraging improvement at just his second start. His sire Jackson produced the winner of Saturday’s Listed Swallow Stakes in the Paul Peter-trained Freed From Desire.