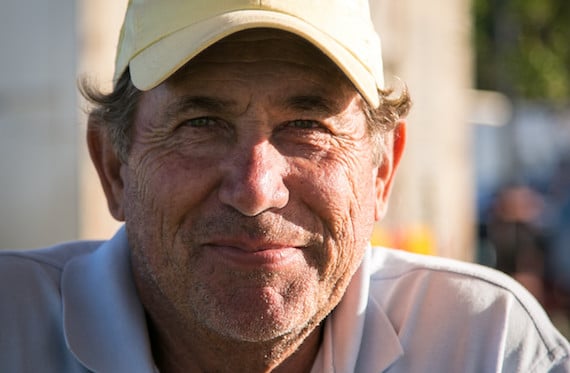 Mike Sharkey has spent a lifetime honing his skills as one of South Africa’s foremost stud masters.

He has been at the helm of powerhouse nursery, Highlands Farms Stud, for nearly 30 years and with new owners, new stallions and the CTS mare sale coming and annual stallion auction coming up, we thought we’d find out what’s in store.

Mike was born and bred in KZN, but spent his formative years at Mauritzfontein where his father worked as a Stud Manager alongside Dr Tremayne Toms. Mike remembers horses like Free Ride, Wilwyn and the Oppenheimers’ first July winner, Tiger Fish. “I learnt a lot from Tremayne and my dad and they taught me how to breed tough, hard horses.”

Did he ever consider a career outside of horses? “Once horses are in your blood, you never get them out,” he says frankly. “As they say, you’ve never heard of a trainer committing suicide with an unraced 2yo in his yard. There’s always hope!”

Interestingly, Mike didn’t go straight into the racing world. During his military service, he ran the army stud for a year in Potchefstroom and then spent a few years as a professional show-jumper, competing against SA greats such as Barry Taylor, Gonda Beatrix, Peter Gotz and George and Janie Myburgh. His years as a competitive rider have influenced his breeding philosophy in terms of producing sound, durable athletes. “When we do matings, conformation is always the most important. The stallion has got to suit the mare – it’s no good having a mating that looks great on paper, but results in something unsaleable and unraceable. Conformation comes first and plays a very important role in selecting mares, stallions and weanlings.”

This philosophy also comes into play when prepping sales yearlings, something Mike rightly enjoys a formidable reputation for. “If you breed a conformationally correct horse, you can feed them and they won’t go wrong. You have to remember that you’re feeding an athlete, so you can’t not feed them and then overfeed them for sales – they need to be on an uphill trajectory all the time. We’ve never been shy to open a bag and feed the horse.”

After his solid grounding at Mauritzfontein, Mike has had the privilege of working with and for some of our industry’s best. He started out as the stud manager for Henry Devine’s Golden Oaks Stud. “Golden Oaks stood Great Brother and we bred a couple of decent horses and of course that relationship continued when Highlands and I started Jet Master’s stud career as he stood here for the first three years of his career.”

When Mr Devine started scaling back his Golden Oaks operation, Mike joined Godfrey Gird at Oaklands in Wellington. “Godfrey was one of the best horsemen South Africa has ever seen,” he says firmly. “Unfortunately he wasn’t quite as good with money, but I learnt a tremendous amount from him, particularly in terms of preparing yearlings. We stood a lot of good horses – Bold Speed, Over The Air, Beethoven, Wicked Will, Spanish Pool, Del Sarto, Northfields… I think we had 11 stallions at one stage. It was not the easiest farm to manage, but horses did well there and did well on the track.”

Mike moved to Highlands in 1991 and has been there ever since. “When I joined, Highlands belonged to Antony Beck. Colin Tyler was running it at the time, but he was getting ready to retire, so we worked together for a year or two and I took over when Colin stepped down.”

Highlands has always had a formidable stallion roster and some of the names Mike has had through his hands include Lords, Elevation, Bush Telegraph, Roland Gardens, Harry Hotspur, Raise A Man, Badger Land, National Assembly, Jallad – the list goes on. “Stallions have always been the backbone of Highlands – they were all champions and it’s still the case today,” says Mike proudly.

It is impossible to find words that do justice to the mighty Dynasty, but with his box well and truly ticked, Mike says he is very excited about their young sires and is refreshingly upfront and objective about his charges. “A horse I’m very excited about is Jackson. He sold well and has had good books of mares. I’m looking forward to seeing what they do on the track. Pathfork is doing well and we can’t complain with stats of 40-odd% winners to runners. He just needs a big horse, but it will happen. He’s an easy horse to mate and he produces good looking horses. His time is coming,” he promises.

Potala Palace – a horse people will want to use again

“Potala Palace has been a bit of an enigma. I don’t know whether his connection with Oscar Pistorius made people shy away a bit, but he produces lovely foals and good looking yearlings. I think he’ll be a horse people will want to use again. He can be a little tricky to manage and has a tendency of wanting to bite himself. He doesn’t like being stabled, so we let him sleep out and that’s helped tremendously.”

Great Britain has been relocated to David Southey’s Southford Stud in the Karoo. “He’s had his winners, but it’s funny, they just don’t seem to win in the Cape. They win in Joburg and they win in Durban, but they just can’t seem to win down here. One of his progeny couldn’t crack a win in Cape Town, moved to Joburg and won 5 or 6. I don’t know if it’s the going, or what it is,” he muses.

In addition to their established residents, Highlands are welcoming a new arrival in Gr1 Computaform Sprint winner, Rafeef as well as hosting Rosedene Stud’s Greys Inn this season. Mike confirms, “Greys Inn will do duty for a month and a half and then head back. The Karoo breeders only start covering in mid-October, so it works well.” It is an innovative arrangement and Mike says there has been a tremendous amount of interest in their visitor so far.

Rafeef is bound for Highlands

But one can tell he is particularly excited about Rafeef. “Highlands has always been bred on speed – National Assembly, Jallad – we’ve had a lot of speed horses. Mike de Kock always reckoned we need good speed horses in South Africa and Rafeef is by Redoute’s Choice and he’s a proven Gr1 winner. His full brother, Mustaaqeem, is a Gr1 winner and I think he’ll head abroad and make a name for himself there, so I’m very excited. It’s great to have a speed horse on the farm. We’re just waiting for them to lift the AHS travel ban and he’ll hopefully arrive on the 4th of July.” Interestingly, Mike relates that National Colour was born and raised at Highlands for Adv Joubert, so standing Rafeef at Highlands brings the story full circle.

Free My Heart showing he’s still got it at 21 years young!

Looking after old friends is another element that makes Highlands special and they stand retired former champions Jallad and his son Free My Heart. “If a horse has looked after you and put your name in lights, you’ve got to look after them,” says Mike firmly. “They were special and they’ll always be special.” While Jallad is fairly sedate at nearly 29 years of age, Mike confirms that Free My Heart is still in rude health and it usually takes 4 or 5 grooms to persuade him to be caught!

Of course stallions are only half the story, a successful stud also needs good mares. “Stanley Bennett, who was long-time manager at Maine Chance, always said you can’t go wrong with the Millies and the Lillies(the Mill Hill and the Lily families). As a case in point, Saturday’s Gr3 Jubilee Handicap winner (Coral Fever) is out of a daughter of Crimson Lily, who stood at Highlands.”

When Antony Beck took over Gainesway, Graham Beck bought Highlands from him (at the time that Beck sold Maine Chance to Andreas Jacobs). “The connection with Gainesway was great and Mr Beck brought in a number of fillies and mares which have stood us in good stead.” Mr Beck was also a famously colourful character and Mike recalls the particular highlight of being at the Kentucky yearling sales with Beck the year he bought Timber Country. “He was a high priced colt and the sale caused quite a stir. I walked around with Mr Beck and D Wayne Lukas at a time when Lukas was on top of the world and got to see how he looked at horses. It was an experience I’ll never forget.” Timber Country went on to win the 1994 Breeders’ Cup Juvenile as well as the 1995 Preakness Stakes.

In early 2017, the reins of the historic stud were passed to the Kieswetter family under the Ridgemont banner. “It has been a great thing for Highlands,” says Mike. “Wayne is a businessman and thinks everything through thoroughly before he commits. He did a lot of research before he bought the farm and they have a great deal of respect and appreciation for the stud and everything it represents. There will be some changes – new stallions and mares in particular. We have been buying in England, Australia and America and have just bought a nice farm in Ireland where we’ll send some of the mares, so there are big things ahead which we are all looking forward to. The Kieswetters are fantastic people and having young guys like Ross and Craig is excellent for the game as well as the farm.”

Save The Date (and the trophy!)

Highlands hosts the CTS Broodmare Sale on Friday, 16 June, starting at 17h30, followed by the Cape Breeders Club annual stallion auction. “It’s our second year of hosting the Broodmare Sale, but CTS organise everything. Last year we had Overarching on the sale. Ross Kieswetter bought her back, thank God, because she produced Lady Of The House who just won the Woolavington. It just shows you can never be too clever!” The stallion night has been a Highlands institution for many years and the event has grown from raising R150 – R200k per auction to the point where support is now such that they raise six figure sums. “Hopefully next year we will have a big stallion night with all the new horses coming into South Africa – I think it will be fun.” Lastly, Highlands, Part of Ridgemont are proud sponsors of this year’s Cape Winter Series, so it is appropriate that African Night Sky, a Highlands-bred son of Dynasty, has won the first two legs and bids to become the first horse since Pocket Power to scoop the honours. The series concludes with the Cape Winter Derby on 24 June.