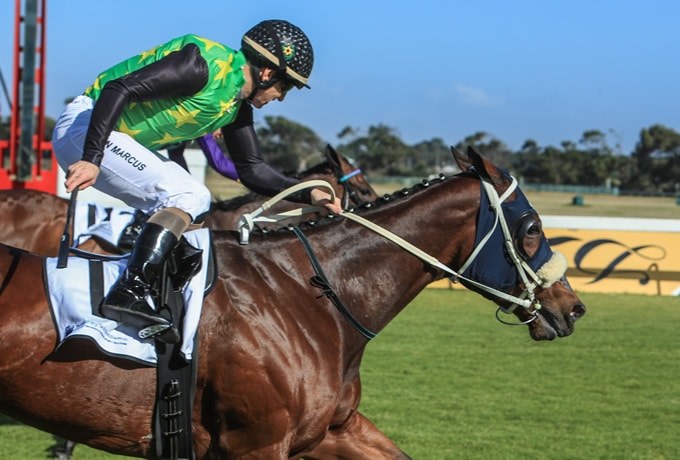 Just What The Doctor Ordered

A shrewd move to fit the blinkers and a drop in distance made the difference for Joey Ramsden’s classy Gr1 winner Just Sensual, who bounded home to win the R400 000 Gr2 Southern Cross Stakes at a gale swept Kenilworth on Saturday.

With the South Easter playing havoc throughout the Peninsula, Kenilworth didn’t escape the wrath of the Cape Doctor and tactics and clever riding played an important role in races round the turn and up the straight.

Anton Marcus, who was to ride a double on the day for Joey Ramsden and Mayfair Speculators, had Just Sensual sheltered in midfield as the Southern Cross Stakes field stormed up the outside of the 1000m straight track, led by speedy Gauteng raider Wrecking Ball.

At the 300m, Just Sensual was switched out for her run as Hoist The Mast and Jo’s Bond looked very dangerous.

When finding daylight, the blinkered Just Sensual took full advantage of the blistering pace of the race as she lengthened smartly and reeled them in gradually.

Hard ridden, Just Sensual found her best stride late to get up and nose out the gallant 66-1 Hoist The Mast on the line. She won in a time of 59,73 secs.

Sceptre Stakes winner Live Life showed some of her old sparkle at her second outing after a rest to run into third, three quarters of a length in from of 2016 Southern Cross Stakes winner, Jo’s Bond, who looked dangerous late.

The highly regarded 4-1 shot Sommerlied missed the places in a rare non-earning run in her professional career, but was only 1,75 lengths behind the winner and cannot be discarded.

Just Sensual is one of five Gr1 winning daughters for Horse Of The Year Dynasty, whose recent Gr3 SA SA Ladies Purse winning son Nassa was a scratching from Sunday’s G1 LONGINES Hong Kong Cup.
Sign up for our weekly Sporting Post DIGEST and join thousands of racing fans receiving the best news and insights

The filly was also one of two winners at Kenilworth on the day for Dynasty, with the latter’s blue blooded daughter Rhone Blue Sky, a full-sister to Winter Series winner African Night Sky, breaking her maiden impressively over 1600m. Bred by Highlands Stud, Rhone Blue Sky was a R250 000 buy from the 2016 Emperors Palace Select Yearling Sale.

Named Equus Outstanding Stallion on four occasions, Dynasty has an outstanding draft on offer at January’s Cape Premier Yearling Sale. His 12 strong draft includes a colt out of Dubawi’s multiple G1 winner Happy Archer (Lot23), a filly out of Oaks winner Princess Of Light (Lot110) and a filly out of Captain Al’s regally bred champion All Is Secret (Lot 187).