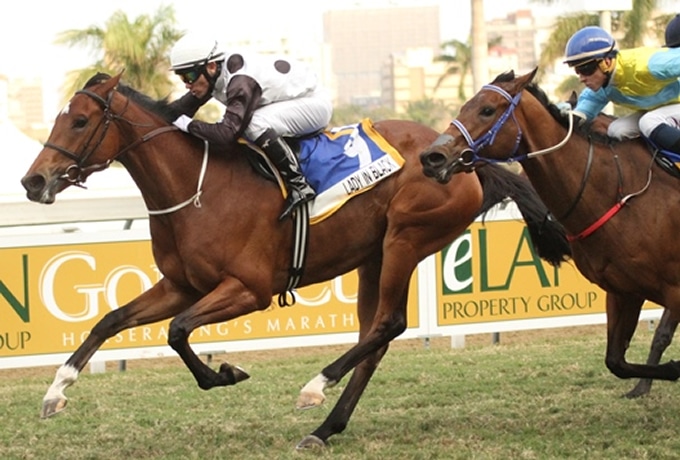 Drier and Veale leave it late – but it was worth it!

Trainer Dennis Drier and jockey Sean Veale left it till the last moment to bank their first Gr1 win of the season. But they did it in style with the very exciting Dynasty filly Lady In Black, who overcame the odds to score a scintillating win in the R750 000 Gr1 Thekwini Stakes at Greyville on Sunday.

‘Exciting’ is an understatement to sum up Jack and Nancy Mitchell’s National Yearling Sale graduate who has oozed class and ability since first cracking her maiden just seven weeks earlier. At her second start to show her the Greyville track, she bolted home on the poly with veteran champion Dennis Drier adding, ‘she’s all class – she’s showed us that she is as good as what we thought she is’.

On Sunday, Lady In Black demonstrated that she is really going places. Jumping from a wide draw against stakes winners, and unable to get a slot in the pack all the way round, then also taking a bump or two, she finished strongly under the enthusiastic Sean Veale, who kept his head down and his mount balanced for an impressive surge to the wire. She won by a half length in a time of 96,16 secs – faster than the clock in the boy’s equivalent a half hour later.

Ironically, Desert Rhythm was the filly who was doing the bumping but when it came down to the nitty gritty, Lady In Black gave the Gr2 Golden Slipper winner no chance – with the favourite’s stablemate Rockin Russian left to do the chasing.

The previously unbeaten pacesetter Folk Dance was still going strongly into the straight, but after ducking in and out, she was running on empty and did well in the circumstances to run third.

Jockey Sean Veale said he had rated Lady In Black from day one and was thrilled with the way the race had panned out.”I couldn’t get in and thought, hey, getting ten days is just not worth it. You see, I’m the pilot and I knew what I had under me. S’manga (Khumalo on Desert Rhythm) gave me a nudge and  she didn’t enjoy that! But I gave her time to recover. What a win!”

A relieved looking Dennis Drier commended Veale for not panicking and thanked his owners and the jockey.

A R1,1 million National Yearling Sale purchase, Lady In Black made it 3 wins from 3 starts and took her stakes to R578 125 – and over and above that also benefitted from the BSA Added Value Stakes Bonus of R154 000.

Bred by Willempie Engelbrecht Jnr, she is by Dynasty (Fort Wood) out of the five time winner Mystery Dame (Jet Master). This is Mystery Dame’s first foal.