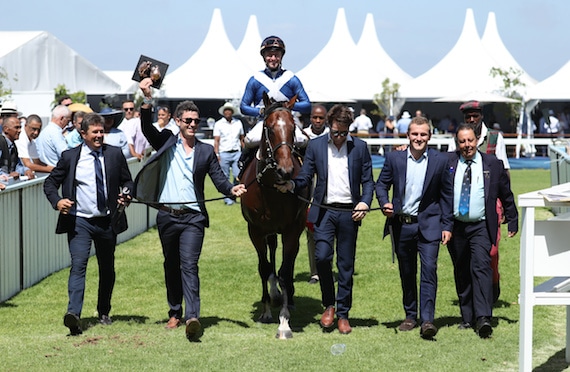 Craig and Ross Kieswetter are the sons of Wayne and Belinda Kieswetter and part of the burgeoning Ridgemont racing and breeding empire.

Craig has been a cricket international and is currently making a name for himself on the golf course, while Ross is immersing himself in all aspects of Ridgemont’s endeavours. The brothers race in partnership and enjoyed their first Gr2 winner when Whisky Baron flew home in the Peninsula Handicap on L’Ormarins Queen’s Plate day. They are young, dynamic and enthusiastic and are a lively addition to the local racing landscape. We get to know them better.

‘Team Kieswetter’ made for quite an entertaining podium party, brandishing an unusual trophy with what looked suspiciously like Whisky Baron’s family jewels. Craig and Ross explain, “Yes, it is indeed Whisky Baron’s ‘anchors’ on the plaque. Getting the brass impression on the plaque was more to do with the disbelief in ‘size’ more than anything else! Ross was there for the gelding with the vet and they were both so impressed that he decided to get them mounted on a plaque. The most amazing thing was that when he was still entire, Craig Carey’s youngest son and his friend could be seen pulling his ears or trying to climb up onto his neck and he absolutely loved it. He is such a kind and well-mannered horse it was only fitting to keep them as hopefully one day he will be retiring to be our lead pony and show the youngsters how to do it.”

It’s unusual, but exciting to have new racing owners in the Under 30 category. What prompted their involvement? “Ross was lucky enough to get a racehorse (What A Mission) for his birthday, although he studied overseas and couldn’t get too involved in what was happening. Upon return the bug bit and the rest is history. When Whisky Baron came along, he proved to be the perfect opportunity to get Craig involved and he hasn’t let us down. The bug has also bitten Craig as he has recently become involved in the jumping scene in England (after losing a game of table tennis)” he adds, mysteriously.

Craig was a professional cricketer for many years and is now making an onslaught on the European Golf Tour – how does the thrill of horse racing compare to the world of professional sport? “Having been involved in professional sport for 10 years, to be able to jump into another environment that has competitiveness and adrenaline is brilliant. Because there are so many days of disappointment, we as a team fully believe in celebrating each success.”

Partnerships with siblings either seem to be tricky or entirely fun and successful, but the Kieswetter boys seem to make it work. “As a family, we are extremely close, and everyone is included in everything. The racing partnership for the two of us came about when Ridgemont was created (Ridgemont run all the fillies in the green, blue and white silks) and seeing as the two of us are colts it was decided that all the colts would be run in our partnership. Needless to say, It has created a healthy rivalry on the owner’s log for the two racing sets.” Ross adds, “Craig has always been a hero of mine, I understand everyone young kid looks up to his older brother, but mine was slightly above average at a few things, so I had more reason than most. I wouldn’t say we argue, more discuss loudly, but it’s important as each needs to know what the other is thinking.”

The brothers’ horses run in the eye-catching blue and white silks, reminiscent of Scotland’s national flag, the St Andrew’s Cross. Is that deliberate? “Yes! Our colours are actually in celebration of our family heritage. We are both half Scottish (through our Mum) and we thought we’d create a set of silks not only for the colts, but also in appreciation of family. It took plenty of ‘discussion’ but we both managed to agree on a set that we liked in the end.”

Whisky Baron was a wonderful horse to follow during the Winter Series and has been a revelation since turning 4 and being gelded. An Australian import by Manhattan Rain out of a Sinndar mare called Tazkara, Whisky Baron was a AUD$50,000 purchase on the 2013 Inglis Easter Sale. by Asked how the purchase came about, they explain, “Unfortunately, neither of us were able to attend Inglis’ Easter Sale in Sydney that year so the burden or honour, depending on how you look at it, must fall to Craig Carey. I’m sure you could ask him, but I have a feeling what happens on tour stays on tour.”

What was it like to win your first Gr2, particularly at a meeting like the L’Ormarins Queen’s Plate? “Obviously, it’s a terrific feeling winning our first Gr 2 race – it’s why we buy and breed horses! A win is a win, regardless if it’s a Gr 1 or Maiden, and we always try to enjoy each success equally.”

Brett Crawford is a dab hand at preparing horses for the big race days and has brought Whisky Baron along very astutely. Has Crawford Racing had a significant effect on their racing experience? “Absolutely! The success of a horse in racing is a combination of things, and having a quality trainer is paramount in bringing not only the best performances, but also the most consistent. Brett Crawford is a terrific trainer, who constantly looks to improve not only the horses but his yard as well.”

Whisky Baron must surely count as one of the most interesting names to grace the entries list. Reflecting on the journey from having their first runner in 2014 to their first Met contender in 2017, spirits are high. “There are absolutely no nerves! There are some brilliant horses in the Met, and just to be entered and have a runner is extremely exciting. Regardless of where we finish it will be a terrific day, full of excitement, and as a team we will no doubt enjoy it thoroughly.”

Greg Cheyne is the retained rider for Ridgemont and it certainly doesn’t hurt having talent like that in the saddle. Will he be riding Whisky Baron again on Met day? “Squeaky Clean will most certainly be riding Whisky Baron, and every Ridgemont horse. He is a fantastic jockey, he reads the pace of a race brilliantly, and has grown in confidence throughout the season. We love having him ride for us as he is a real team player.”

Will we be seeing Whisky Baron’s ‘trophy’ again on Met day? “As is tradition, whenever Whisky Baron wins, his trophy will be led in with him!”

It was recently confirmed that Ridgemont have purchased one of South Africa’s premier nurseries, Highlands Farms Stud in Robertson. Are their plans for either Craig or Ross (or both) to get more involved on the breeding front? “When Ridgemont was first created, it was going to be a small breed-to-race venture, but now with the help of so many people that idea has grown into something very special. I suppose the cat’s out the bag and can say that we are extremely privileged to be involved with Highlands Stud Farm which is steeped in history and tradition. Racing is amazing fun, but there is something about those little foals that really reminds you what is important in life.” Craig confirms that his involvement in Ridgemont is quite peripheral as he resides in the UK and is pursuing his golfing interests. However, Ross is heavily involved in all aspects of Ridgemont and a big contributor in all decisions made with regards to buying/selling/breeding of all Ridgemont horses.”

Craig and Ross are Cape Premier Yearling Sale regulars, saying, “We have been to the CPYS a couple of times now and each year they keep upping their game with quality of horses. It really is unlike any other sale where upon leaving the sales ring you can be sipping an ice-cold beer at the Waterfront within 5 minutes.” Highlands are presenting their usual high quality CPYS draft with this year’s consignment including half brothers to Soft Falling Rain and Futura and half sisters to Potala Palace and Russian Sage amongst others. Will the purchase of the stud affect this year’s Cape Premier Yearling Sale draft at all? “Highlands will stay as Highlands and this year’s CPYS draft will all remain under the Highlands banner. Highlands Stud Farm has produced fantastic horses through the years, and we shall be on the edge of our seats as the yearlings enter the auction ring.’