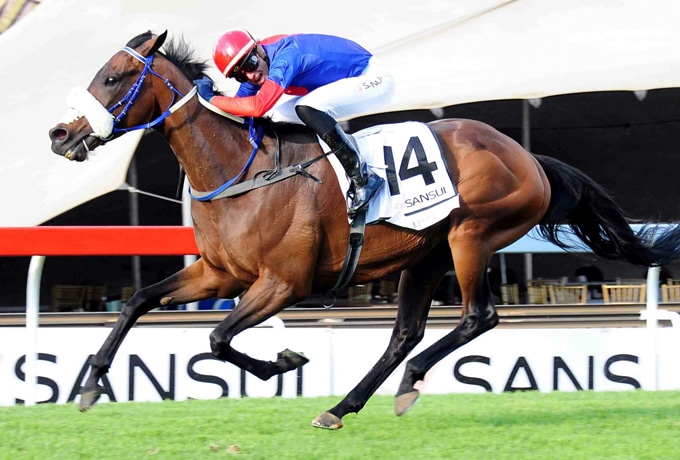 Raymond Danielson gets the best out of Liege (Pic – JC Photographics)

On a day of topsy turvy results, Raymond Danielson delivered the enigmatic son of champion sire Dynasty, and a horse Tarry had not expected to get in ahead of his fairer sex stablemate Witchcraft, at the right moment for a big score.

Tarry has endured a quieter start than usual this season, but summed things up beautifully in the post-race interview – saying, ‘If you can’t be good all the time, be good at the right time!’

Liege was the least fancied of the Tarry Summer Cup attack and after his dull Victory Moon effort, he was freely available at long double digit odds.

The 19 horse field jumped on ground posted as good to soft with a pen reading of 24 and it was Crowd Pleaser, Let It Rain and Girl On The Run who set the gallop, with Liege settled in midfield.

In the run for home, Girl On The Run continued to gallop powerfully as Orchid Island flattered briefly, with Fort Ember scooting up the inside rail.

At the 450m marker, Raymond Danielson glanced to his inside as he drove Liege through a gap to grab the advantage.

With many labouring in a serious test of stamina, Liege went on too powerfully for the game Fort Ember to score by 2,25 lengths in a time of 124,40 secs.

Muzi Yeni rode for his life to get the recent Victory Moon Stakes runner-up Coral Fever up for third, with Derby Trial winner Pagoda finishing with his customary late dash for fourth.

Victory Moon Stakes winner Girl On The Run was prominent for a long way and stayed on for fifth.

The 2016 SA Triple Crown star Abashiri was the last horse to earn a cheque, banking R10 000 for his eighth place when finishing 4,25 lengths off the winner.

The gallant 8yo Master Sabina, bidding for his third straight win in the race, ran a distance stone last and looks likely to be retired – with earnings of close on R4 million, he owes his connections nothing.

Sean Tarry, whose last Summer Cup winner dates back to Aslan in 2009, was pleased with the win for two of South Africa’s most powerful owners.

“We were disappointed with his run in the Victory Moon and there was no explanation for that. Thanks to Markus (Jooste) and Chris (Van Niekerk). Well done on the big decision to delay the meeting – it took courage on the part of all involved. It is sad for the sponsors and plenty of people had plenty to say. But all’s well that ends well.”
Sign up for our weekly Sporting Post DIGEST and join thousands of racing fans receiving the best news and insights

“He felt so good today – so much better than at home. He was fit and well. Thanks so much to Mr Tarry and Mr Van Niekerk. It’s a privilege to ride these kind of horses.”

A R650 000 Cape Ready To Run Sale graduate , the Maine Chance bred Liege is a son of Dynasty (Fort Wood) out of the eight time winner Lyrical Linda (Jallad).

Liege, whose previous biggest win was the 2016 Gr3 Jubilee Handicap, does not look likely to bid for the R1 million Summer Cup-Met double bonus.

Spare a thought for Summer Cup King Geoff Woodruff. On the cusp of a fifth successive victory in this race, his attack was cut down to two runners after the scratching of Banner Hill, but Pagoda carried the flag with honour to run a cracking fourth. The Guv will be back.